“Creativity is just connecting things. When you ask creative people how they did something, they feel a little guilty because they didn’t really do it, they just saw something. It seemed obvious to them after a while. That’s because they were able to connect experiences they’ve had and synthesize new things. And the reason they were able to do that was that they’ve had more experiences or they have thought more about their experiences than other people.”… Steve Jobs (Apple)


Maybe your mind works as a connecting machine the way mine does. I see, I hear, I feel, I touch, I sense … you know all those things that we humans do. Each action brings forth a connection with something or some event that happened sometime …perhaps a minute ago or “back in the day.”

Is that your way of thinking and processing? Each of us tends to believe that most people process the world in the same way even though we know that’s not so. Even imagining others just might be the same as ourselves interferes with our work as coaches just as soon as we think that’s how things are.

Steve Jobs built Apple, Inc. into one of the world’s greatest companies. I’m not here to judge or even describe how Apple works, suffice to say it’s a highly creative company developed by a person who could connect something with something and make a bit of magic out of doing that.

My experience is that one can learn something new or newly described from just about anywhere. In this case, I’m looking at how all of this relates to coaching.

I’m giving a keynote address to a conference in Toronto at the end of October. My charge is to connect Rocket Science with …well, just about anything else … in this case, coaching. 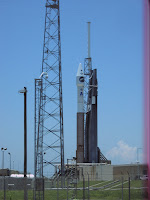 Instead of assuming anything about how you and I learn, I went consciously into idea mode … taking over two months to figure it out. Of course, nothing is ever figured out completely so I just must go with my intuition this time.

One can and does learn from rocket scientists and engineers. It’s just a matter of communicating what that is.
Posted by CoachChristine at 10:03 AM No comments: